A lot of car racing sports are born in England, the Rallycross also. In november of the year 1967, RAC Rally, one of the future world’s championship Rally, was cancelled because of a viral epidemy. To avoid race’s cancelation, and more of all to honored televisual contract with BBC, organizers drawed on the circuit of Lydden Hill, not far from Douvres, a race track with bitum and ground. With their rally cars, pilots started races on the same line of four, for three laps. Rallycross was born. Since 1968, regulation defined this new car competition in England, before that nordic countries, Holland and Belgium adopted the discipline… The first french contest proceeded in Loheac, sunday 5 september of 1976, on a little race track of 850 meters of long, traced quickly with a bulldozer in a wheat field. Since 1977, French Championship has been created and since that times, the competition’s form didn’t change that much. 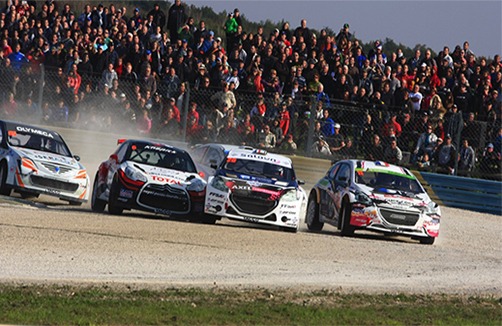 A common FFSA and AFOR initiative

FFSA (Fédération Française du Sport Automobile) entrust AFOR (Association Française des Organisateurs de Rallycross) for the organisation of Rallycross French Championship and French Cups. Since the beginning of Rallycross in september 1976, it was imperative that an association (under the french law of 1901) federate the whole event organisation. It allowed to have a common vision for the championship or cups. To rise up the level of the competition and make it the best ground track discipline.

Since the beginning of Rallycross in 1976, an association is created, named FAR (France Association Rallycross). In 1982, the AFOR (Association Française des Organisateurs de Rallycross) take charge of the organisation. With several role : find new nationals partnerships, organise a TOP 10 challenge, to drive the Twingo Cup, to promote the winner of this cup in Super 1600 Championship, with a Renault Twingo Super1600. AFOR take also charge of the communication for the whole french championship.

Since 2014, AFOR is very active on digital communication.